Updates from NOAA on Elwha science

Yesterday Sarah Morely of NOAA/NWFSC Watershed Program, Fish Ecology Division gave a 40-minute synopsis of the “Elwha River Dam Removal – Past, Present, Future.”  My notes are appended and the NOAA site has an abstract with recommended references (also appended in case the link breaks). 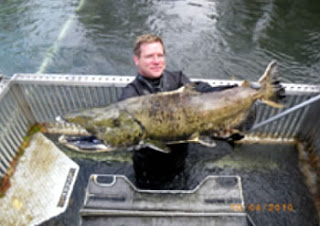 The most interesting aspect of the talk from the perspective of the southern resident killer whales is that no one in the audience, including Mike Ford, offered a clear articulation of the strategy for recovering the Elwha’s chinook salmon — and particularly the possibly extinct spring chinook of 50-kg fame.  Given their strong preference for big chinook (Hanson et al., 2010), the southern residents would presumably benefit most from the fast recovery of the biggest Elwha chinook, but Sarah only indicated that her impression was that the return of salmon to the Elwha was going to more “natural” than managed.  With large salmon and a combined species population potential of ~400,000 fish, we ought to be very clear as a community about the chinook recovery strategy!

That led one audience member to wonder whether the spring run is really extinct and, if so, how long it might take the fall chinook population to naturally fill the spring niche.  He asked whether 25 years might be a good guess for natural recovery of the spring chinook runs if adults are not moved above Glines Canyon dam to facilitate their re-colonization of the upper Elwha and tributaries (as is currently being done at Condit Dam on the White Salmon), but Sarah didn’t volunteer a confirmation or an alternative estimate.  The audience member’s suggestion of possible extinction is echoed on the National Park Service’s web page on the historic range of Elwha chinook:

Very few, if any, spring-run Chinook remain in the Elwha.

This made me realize that I (or some other southern resident stewards) need to dig into the EIS and figure out if the spring chinook are being managed in an optimal way from the perspective of the salmon-eating killer whales.  If they are not, then perhaps we should all make it a priority to change the situation.

In sleuthing around for details on the Elwha chinook runs, I did start to answer a different long-standing question: “Why were the Elwha chinook so big?”  I had heard 2 compelling hypotheses: (1) velocity and vertical barriers are more substantial on the Elwha than on comparable (Olympic) rivers and selected for fish powerful enough to surmount them; and, (2) stream bed gravel size in the Elwha is much larger than on comparable (Olympic) rivers and only bigger salmon could dig in it to build their redds.

The first hypothesis is addressed in Brenkman et al., 2008 (special issue of Northwest Science).  They describe the velocity and vertical barriers on the Elwha:

The 7.9 km of main stem habitat currently available to anadromous salmonids in the Elwha River will increase to 71 km following dam removal. Possible seasonal velocity barriers exist in three main stem Elwha River canyons during periods of high river flows (Figure 2)—Rica (rkm 26.1 to rkm 27.3), Grand (rkm 31.1 to rkm 35.3), and Carlson Canyons (rkm 53.0 to rkm 54.5). Rica Canyon consists of bedrock, large boulders, and high-velocity water with several cascades and falls up to 1.8 m in height. The upstream portion of Grand Canyon contains several cascades and low waterfalls, and the lower 2.4 km of Grand Canyon contains approximately 15 cascades and falls. Carlson Canyon has a single waterfall that is 2 m in height (Washington Department of Fisheries 1971).
Seasonal velocity barriers in the Elwha River occur where the river channel is constrained by steep canyon walls and boulder- and bedrock- dominated substratum. Canyon reaches have channel gradients that are up to two times steeper (2% in Rica, Grand, and Carlson Canyons) than the average gradient for the entire 69 km of the main stem river (1%). High-flow events resulting from early winter storms and spring runoff create high-velocity cataracts that may constitute seasonal migration barriers to salmonids moving upstream. In contrast to these steep canyons, other sections of the Elwha River are much more gradual, with gradients of 0.3% from the mouth to Elwha Dam, 0.8% from Elwha Dam to Glines Canyon Dam, and 1.4% from Glines Canyon Dam to the headwaters of the main stem.

While salmon are generally capable of jumping 1.8-2m barriers, their ability to do so is limited by the pool size (particularly depth), relative position of the pool and the hydraulic jump, and degree of aeration in the pool.  I’ve yet to find these details, but if they don’t exist, I know what I’m doing on my next hike up the Elwha drainage!

MY NOTES ON THE TALK:

Sept 16 was beginning of deconstruction of dams. Deconstruction will take another 2-3 days. Salmon recovery is expected to take decades.

Poff & Hart, 2002, Bioscience: increased dam removal over last 30 (now 40?) years is due to replacement generally being more expensive than removal, BUT most removed dams have been small.

Lower Elwha (190? 1913) and Glines dams (1932? 1927) reduced sediment, river movement, woody debris, as well as salmon populations. They will be removed concurrently in controlled increments over 2-3 years (to minimize impacts of sediment to fish as well as benthic organisms. 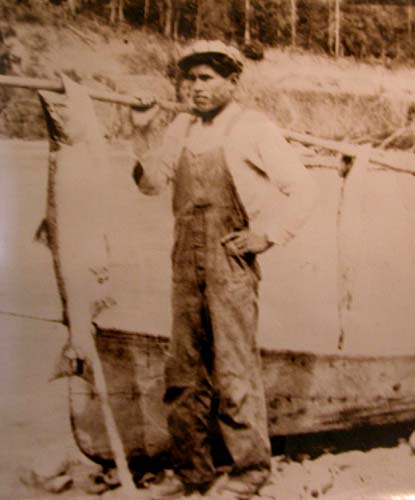